This blog post is to acknowledge and celebrate everyone who has helped make Queer & Trans Yoga a reality at QSY. We so appreciate the committee of community members (of varying genders and identities) who helped us envision and promote the program, to everyone who came through the door to attend the class: THANK YOU.

One of the things that felt important to us about this class was the presence of Shannon, a queer-identified teacher. We felt it was important to have a queer-identified teacher to set the context of this class. We are sad to announce that Shannon has decided to move her life to Toronto this fall, and so won’t be able to continue teaching the Queer & Trans Yoga class. (But we are happy for her to pursue her next adventure in life!) After some conversations with her and a few other co-creators of Queer Yoga, we’ve decided to transition the Queer Yoga class back to a Community Class in September. We considered keeping it as a Queer Yoga class, but since we didn’t have another teacher that was queer-identified, we felt that it didn’t make sense to keep it going without someone from that community to hold the context. Thank you Shannon for spearheading this class and sharing your love for yoga in the Queer & Trans Yoga class!

We are framing this shift as putting Queer & Trans Yoga “on pause” rather than “cancelled”. We hope to re-start the class again in the future when we have a solid relationship with a queer-identified teacher who is passionate about teaching this class. Until then, we wanted to celebrate the successes of this iteration of Queer & Trans Yoga at QSY, and look forward to it returning to our schedule in the future!

*Promoting the class in the wider Rainbow community, to high schools and at Tri-Pride

*Being invited to talk about the class on Rogers TV

Seeing Gender as a Spectrum: Some helpful definitions to start a conversation

Queen Street Yoga is committed to continue working on being a queer-positive space, and keep refining how the space can be made more and more accessible. If you have any ideas or feedback about how we can refine/improve in this area, please email us and let us know your thoughts!

A few more thoughts, from some of our Queer Yoga advisory committee members:

Sara F, who was our work trade on Sunday nights during the Queer Yoga class, and hosted the Facebook page, had this to say about Queer Yoga: “Working the trade shift, I met the students each week and was able to see the transformation in some of them, from nervous and apprehensive, to confident and feeling comfortable at the studio. I saw new faces come through the door.  In the community, I heard gratitude and affirmation for the importance of offering this class.”

Chris B, who has been a work trade at QSY for a long time, was a big supporter of the class. He let us know that: “I observed students attending the class who had never been to the studio before.  That made me wonder whether people suddenly felt more comfortable to check out yoga – that the space felt even safer.  I rarely attended Queer Yoga but that’s because I feel comfortable going to the studio on other occasions. We certainly built a lot of momentum and I think all the efforts to educate staff/trades via the memo binder were really awesome.  I think it’s one thing to say you’re a safer space and it’s another thing to concretely provide that.  This class was a clear indication to the community that Queen Street Yoga welcomes students of diverse gender and sexual identities.  A concrete example of how QSY is trying to change hearts through action. I was very proud to represent the studio at Tri-Pride.  That was a really cool accomplishment, too!  I bet people were pleasantly surprised to see a yoga studio outwardly promoting queer initiatives. Lots to be proud of.  I hold tremendous gratitude in my heart.  I am very fortunate to be a part of a studio that creates change and embraces diversity.”

Once again, thank you to everyone who made this class a reality, and who supported this initiative. We look forward to the next iteration of Queer Yoga at QSY! 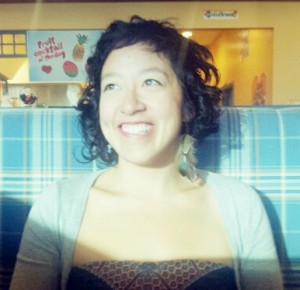 Emma Dines is the manager of Queen Street Yoga. She loves writing, visiting thrift stores and going for walks in the woods. She also loves cartwheeling, sewing and making her own kimchi.