This guest-post was written by a member of our Yoga Teacher Training program, Julie Raineault.

I am sure you can relate to the great feeling you get when someone suggests you sigh in class and the room shares this big beautiful ahhhh moment. Maybe not everyone joins the first time but by that second or third time more people join and it really sounds positively delightful. But why is it okay to sigh in the studio but when you are out in the world everyone seems to think there is something wrong.

Well these are questions I sought to answer, not just because I love how a room full of sighs reminds me of The Heart of Gold’s (the ship from The Hitchhiker’s Guide to The Galaxy) oh so lovely sighing doors, but because my body sighs…A LOT. END_OF_DOCUMENT_TOKEN_TO_BE_REPLACED

For me, a summer in Ontario isn’t complete without at least four or five days of back-country canoe camping in Killarney Provincial Park. Killarney is about five hours north of Kitchener-Waterloo on the north side of the Georgian Bay. It boasts some of the most beautiful lakes, scenic mountains and dramatic rock faces that I’ve had the pleasure of canoeing and hiking along. 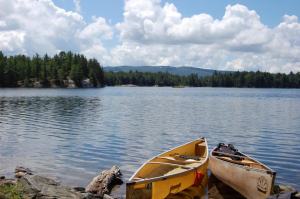 If you’ve never been canoeing, let me teach you a new vocabulary word: Portage (noun or verb). I’m glad Canadians are at least bilingual enough that you can pronounce it the more elegant way en francais up here. Honestly, Americans butcher this word. Pronunciation aside, when you hear portage think carrying a huge pack on your back and a canoe on your shoulders for anywhere between a few dozen meters to a kilometer or more! Given that I’m only 5’3” and the canoe is 17’ and about 50lbs, a little extra prep for my shoulders and upper body before heading on a trip is super helpful. END_OF_DOCUMENT_TOKEN_TO_BE_REPLACED

This post was written by Leena Miller Cressman, director of Queen Street Yoga, about her current thinking and understanding of inversions.

We recently added the following statement to our “Studio Policy and Etiquette” document that we post around the studio and on our website. We are the first yoga studio community that we know of to make a public statement about this. We hope that this adds to important conversations about safety and risk in the wider yoga community.

Inversions at QSY: We choose not to teach full Headstand and full Shoulderstand (where weight is placed on the head and neck) due to safety concerns for the spine. We ask that students do not practice these poses before, after, or during public classes for the safety of all QSY members. 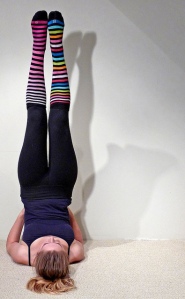 Different styles or traditions of yoga define inversions differently. Most generally, inversions can be any pose where the head is at a lower position than the heart and pelvis. This could include simple and common poses like downward-facing dog (Adho Mukha Svanasana) or standing forward bend (Uttansana), but also arm balancing poses like handstand or forearm stand. The two poses often called “full inversions” in yoga literature are headstand (Salamba Sirsasana) and shoulderstand (Salamba Sarvangasana). Many teachers, such as BKS Iyengar, have gone as far as to say that headstand and shoulderstand are the King and Queen of all yoga poses.

END_OF_DOCUMENT_TOKEN_TO_BE_REPLACED

This post is by Neman, one of our yoga teacher trainees. In this post it he reflects on the relationship between asana (yoga postures), philosophy, religion and teaching yoga in the modern world.

Halfway through this inspiring yoga teacher training program, I’m stuck on something that seems to be nothing to pretty much everyone else. When I started, I thought that yoga meant asana – the postures. Wow, was I wrong. Karma, bhakti, jnana… where was asana? Fresh new words (some I didn’t even realize I knew – cool!) were describing much more about yoga to me than I bargained for. Hey, it’s not like I pretended I knew my way around the (yoga) block, but it was fascinating to see how much more there was, and how relatively insignificant downward facing dog is to yoga itself.

The core yogas as described in the Bhagavad Gita – there are many – include work (karma), devotion (bhakti), and knowledge (jnana). But where was the yoga for my core? Not there. The Bhagavad Gita is a primary text in Hindu philosophies and yoga studies. It’s a discussion between Arjuna, a very important prince and conflicted warrior, and Krishna, his chariot driver, who just happens to be, well, the Krishna. Yeah, that one. God. Krishna discusses duty, devotion, destiny, and dharma – but not down dog. References to asana are very limited and do not at all describe what we do in stretchy pants.